The other day, I arrived home from London. I was only there for four days and three nights but it was an amazing holiday. I honestly wish I was still there. I’m a huge city girl, and I loved the buzz that I felt around London. Ever since I first visited London when I was thirteen, I have loved the city. My family decided to visit because I just finished my exams so it was a bit of a treat for me. It’s kind of bitter sweet, thinking about the holiday now because it flew by so quickly, and I already wish to go back. I decided to make some posts about what I did while I was there.

Day one of my London trip began at 3.a.m. in the morning. Despite the early hour, I felt wide awake and fully prepared to take on the day. The excitement from the fact that I was going on holiday gave me all the energy that I needed. The only drawback was security. For some reason, going through security machines in both the airport or shops always makes me extremely nervous. I don’t know why as I have never stolen anything nor do I own dangerous items. I brought no liquids with me on my carry on to be completely safe. I also made sure not to wear any metal on my person. Once through security, it was maybe 4.30.a.m. We had gotten through the check-in part of the terminal very quickly and security was also very quick to get through. I then headed with my family to get some breakfast which was stressful. Anyone who has been in terminal 2 of Dublin airport will know that the layout is terrible in the food court – especially when it’s busy. It’s long and narrow making it hard to actually access some of the food. Much to our dismay, by the time we got through the long queue, our food was cold. By the time we were finished, it was 5.30 a.m. and suddenly, our flight was having it’s final boarding.

We had to rush to the place where our plane was taking off from and finally got on. It was odd that we boarded so early. Then it actually took about 45 minutes to lift off. At 6.30, we had arrived in Gatwick airport. I soon learnt the hard way why packing light is vital when travelling. We got a train to London Bridge train station. There I had my first black taxi experience. I don’t know how Londoners feel about them, but I am obsessed with the traditional London taxi’s. Irish Taxi’s are just normal cars and really boring at the best of times! We were staying near Borough Market- although we never actually had time to visit the market place itself- in the Borough area. We went and had a proper English breakfast in a lovely, authentic breakfast cafe, called Terry’s Cafe. The food there was actually the nicest food I’ve had in a while, but it was really the decorations that I loved the most. From old pictures of London to wireless radios and old boxing gloves, I felt like I had traveled into the past while I was eating Brunch.

After eating the best breakfast of my life, I headed to the Imperial War Museum, which was amazing. For a free tourist attraction, it had a lot of exhibitions. It had old war tanks and old world war 2 uniforms. From Bomber jets to Victoria Cross medalists, the museum told the story of different people who lived during different wars, both in the past and more recently. They had exhibitions on life for a London family during the Second world war, which I loved. It’s one thing to know the facts about the war, it’s a different thing to discover the way it effected the people who lived during the history we casually learn in school. I then got an ice cream while my sister bought about ten key rings from the gift shop. 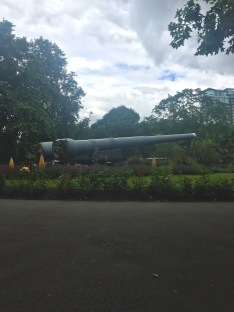 It wasn’t until two o’clock did we get to check into our apartment that we were staying at. I was exhausted at this stage, and the thought of going anywhere else was looking very doubtful. However, later on in the evening, we boarded a bus – which was exciting because it was the first time I had ever been on a red bus which is such an icon for London in the eyes of a foreigner. Getting the bus to Kings Cross station, I achieved what every child dreams of- going to Platform 9 and three quarters! I lined up for about an hour but it was so worth it. My sister and I donned the red and gold Gryfindor scarves and got our photo taken. I nearly went for a Slytherin scarf to annoy the attendant who had a clear disdain for the house. Once I had purchased my picture, I bought some house pencil and a box of Berty Botts sweets.

My first day in London was long yet amazing. Looking back on it, I wish I could be in a time-loop and do it all over again! But there is no stopping time. I love family holidays because I love getting to spend time with my parents and my two little sisters.